On consideration of my feedback from my tutor I’m trying a new format for this blog. I’m going to be starting to write each project up in a single post. I will add to the post as I do the drawings for the project, which I’m hoping will make the intention of the drawing process clearer.

I started by experiments in my sketchbook. 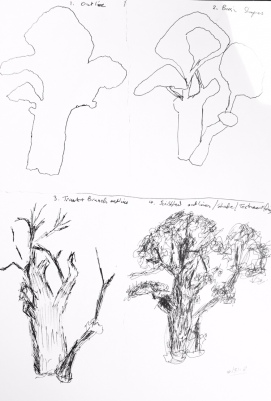 This was (more or less) starting by following the instructions in the book and seeing where it lead me. There was relatively little additional research other than simply drawing in graphite in an A4 sketchbook.

The first few are of the same tree. Though the area issues in construction and a lack of context I liked the general approach and feel. The second tree (more of a pine) was drawn using the same basic approach, but trying to get a different feel to the body of the needle “clouds”. The addition of the fence as context also improved the look of the piece, and so I decided to go on to the next exercise of drawing a single larger tree.

This is a small sketchbook drawing. I was trying to build up the image using oil pastel “spots” rather than dragging the pastel. The drawing is quite basic, but the purpose of the experiment was to try to build a feel of the tree overall.

Some part of the tree image work, but overall I’m not keen on the result as a whole. I need to put more consideration into the approach and do more experiments if I’m to use this on a larger piece. For the moment, however, I’m putting the oil pastels aside.

I decided to use ink this time in an A3 sketchbook. Other than adding a little context, however, I was more or less following the instructions. I started off using a single colour of black ink, as this seemed to meet the concept of using a line medium well, which was going fairly well – but I felt the addition of a little colour might help. In areas where I thought it would help I decided to add a little ink wash.

Overall I like the feel of the result, but it is possible a little flat. I deliberately kept the contextual detail low, and edited out some of the tree detail. (By now I’m working from the sketches and a photo I took at the time.) It is somewhat naive in construction, and the proportions are somewhat off – but it has much of the feel of the original tree and why I chose it.

The line and wash is interesting, and I enjoyed making it. The paper I chose wasn’t a good choice for a wash though. (More or less printer paper at 70 g/sqm.) The paper crinkled quite badly. I would like to retry the scene without so much black line (possibly using coloured inks for the line), and using a more suitable paper.

In this experiment I decided to go a slightly different way to create a group of trees as a scene. The experiment is in my A3 sketchbook on off white sugar paper. The 4 black arches on the left are rings from the sketchbook, not part of the image.

Unfortunately I allowed myself to get lost and abandoned the experiment. I may come back to it based on this sketch and a photograph I took at the time, as there are things I like about the scene.

What worked is the tree reflections in the water, and the feel of the drawing overall. Unfortunately, the composition is poor, as the sweep of the right hand side of the river should be lower down. That would have allowed me to put in more high level tree interest, and the lower part of the image was turning out less interesting that I expected.

The idea of blocking out space and then filling in pat by part was fairly effective, and I need to experiment with this more. I will, however, need to work out a better approach to how I approach constructing the image – as I stated above I partially abandoned because I got lost in building the image.

Trees in a garden 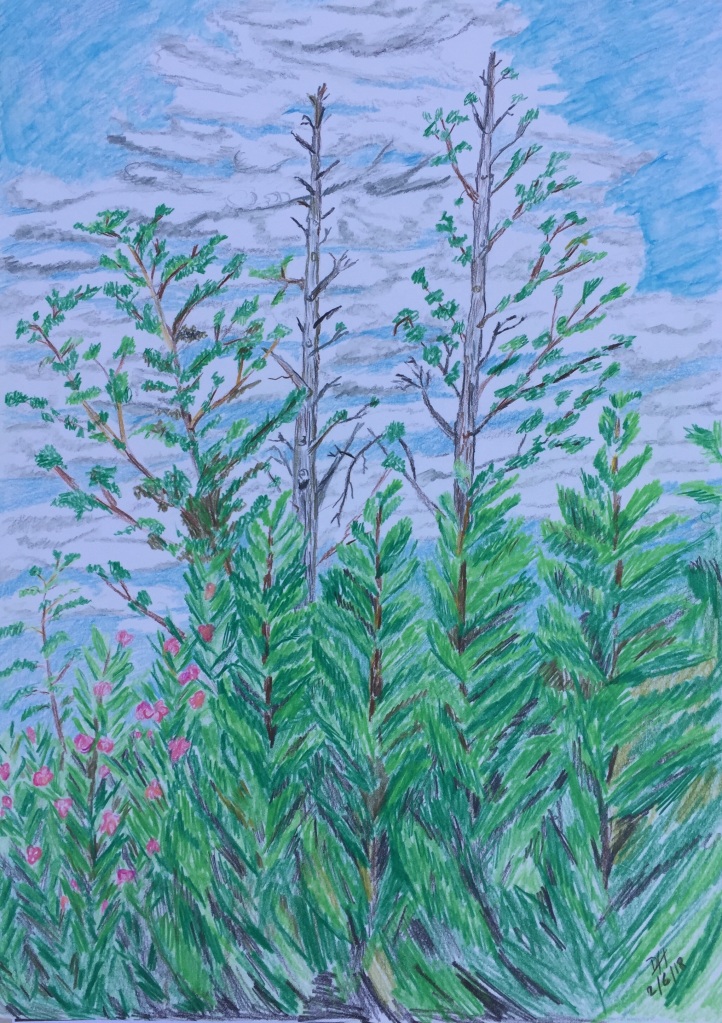 On the positive side: I like the overall feel, and the mix of styles for different species. The slight shot of pink flowers is nice. I like the two high tree trunks. The central one was all but dead.

On the less positive side: The front trees are a bit too flat. Initially the background was more cloud, but changing it to more sky looked better. Still a way to go there though. Although I deliberately edited down the leaves on the left hand tree I may have gone too far. Not sure water coloured pencil was the best choice of medium, though I liked the sky wash. The clouds are very flat feeling – but that was partially  choice to ensure they were clearly background.

The approach to pine Like leaves is worthwhile. Water colour wash, then dry and rework is useful but so slow I need the final result to really be worth the time spent on it to use the approach. The 300gsqm paper has worked fairly, and I think will work well for work that involves water in the future.